Flight
Tails is a version of Tails from Sark's dimension. He used to work under Sark before being killed by him. He is first mentioned in Nightmare Shorts: Sark's Reasoning. However, he has not appeared in the games so far.

When Sark came in Tails and his friends' dimension, he not only killed and possessed the Sonic in that dimension, but managed to demonize most of the inhabitants living there, including Tails himself, Knuckles, Dr. Eggman, Sally, Cream, and Amy. Sark then began to use them as his servants.

At some point, Tails assaulted Cream sexually, as seen in Sark's Reasoning. Because of this, Cream seems to despise him. And eventually, Tails decided to rebel against Sark along with Knuckles. This plan, however, did not succeed, as they both were killed by Sark himself.

Not much is known about Tails' personality when he was alive. However, due to the way Sark demonizes, he ended up going against his master's wishes, becoming rebellious and lustful. This behavior led to his death.

Tails, when demonized, looks similar to when he was alive, but with dark grey fur instead of orange, and his eyes have black sclerae with red pupils and blood coming out of them. 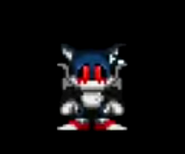