|<This is a featured article!>

Tails was a resident of Mobius and a honored member of the Freedom Fighters. He became famous and well-known as the best friend of Sonic the Hedgehog. Living near Green Hill, his typical lifestyle was working with Freedom Fighters.

Interested in mechanics, he even once built his own plane. After meeting Sonic for the first time, he learned a lot in life. Tails was able to get acquainted with everyone in the district, even with Knuckles. And after that, he chose to join the Freedom Fighters.[1]

|<The information shown below is part of a simulation.>
Tails is one of the three victims that Exetior is going after. Being a key character, only he can learn the truth about Exetior and Sonic, in which he sees Exetior entering Sonic's body and mind.​ He is playable in the levels Green Hill Zone, Hide And Seek, Scrap Brain Zone, and Fatal Fog.

|<The information shown below is part of a simulation.>
Tails plays a role in Part 1 in Cream's route.

In Carnival Pursuit, he is seen making a wall of spikes. If Cream lost the race, he will have completed the wall, making Cream unable to survive, but if she won the race, Tails will not have finished the wall. If she survives, Tails quickly disguises himself as normal, but Cream quickly finds out that he and Knuckles were trying to kill her, and they reveal their true appearance before chasing her.

Tails plays a role in Part 1 in Cream's route. He performs the task of murdering Vanilla, but he messes it up by greatly harming her psyche with the way he killed her,[2] making her unable to be demonized.

Cream has the potential to find out that Tails brutally murdered her mother, in which he will say he didn't want to do it, but then Inner takes over and he is about to kill her before Knuckles stops him and kills Cream. He also appears in a special cutscene telling Exetior about his mistake in killing Vanilla.

In Carnival Pursuit, he is seen making a wall of spikes. If Cream lost the race, he will have completed the wall, making Cream unable to survive, but if she won the race, Tails will not have finished the wall. If she survives, Tails quickly disguises himself as normal, but Cream quickly finds out that he and Knuckles were trying to kill her, and they reveal their true appearance before chasing her.

In Part 2, he is not seen except for in the True Ending, where he tells Exetior he's coming. He is mentioned in the Betray-Tion Ending by Exetior, who says that he would send Tails with Knuckles, but that he is extremely unstable.

Tails is sent along with Knuckles on a mission to find the Time Stone through a portal that Pervision was curious about. Tails decides to go in, going against Knuckles' wishes. They then become trapped in the X-Dimension and Tails then insults knuckles, mocking him for being "scared". He then goes off on his own.

While walking in the X-Dimension, sAnITy's Sonic form appears and jumpscares the viewer. When he comes back, he's in a world which resembles the games in the "Sonic2.exe" trilogy. In that world, he is confronted by Inner Tails. He eventually escapes the dimension and escapes with Knuckles out of the portal after failing to obtain the Time Stone on Tails Doll's head.

|<The information shown below is non-canon.>
Demonized Tails is seen at the beginning of the episode with demonized Cream. She asks Tails why he continues to kill her in different timelines, and it shows various images of Cream getting killed. She says that he had already saved her once, with another image showing demonized Tails standing in front of demonized Cream, with Boddys about to attack her and Sark in the background.

Tails admits that he doesn't know and would like to stop it. It shows demonized Tails and demonized Knuckles in Sonic's mind. Sonic appears and the other two look at him pleadingly, but Sonic turns away from them and walks away. Tails says that Exetior said they have to kill her over and over again. Tails quotes his words that they and the girls need more energy, but asks why they have to kill them so cruelly and painfully.

After demonized Amy tells Cream to go, Cream stays for a bit and tells Tails that it's fine since he doesn't want to harm them in any way, and thanks him. Cream leaves, and then Tails frustratedly says "Here we go again".

|<The information shown below is part of a simulation.>
Tails is seen several times throughout the simulations of Nightmare Beginning in the episode.

Tails was kind and always ready to help someone, along with having a strong attachment towards his friends, especially Sonic. He was a modest guy, not being very strong compared to the others within his group. But he was very clever, as he has saved the city many times from attack of Eggman's robots by building energy shields for Sally and the rest of the Freedom Fighters crew.

Before meeting Sonic, he was shy, had little contact with anyone around him, and had low self-esteem.

After being demonized, he has occasional bouts of aggression and brutality due to the fact that his demonization didn't go well because of a demonic essence appearing inside of Tails' mind​, creating what is known as "Inner Tails".[1] He takes sedatives to combat this.[3] However, he's still able feel a strong attachment to his friends, especially Sonic. He suffers due to seeing how Sonic does not recognize that Tails is still his old friend despite the demonization.[1]

Tails, when demonized, looks similar to when he was alive, but with dark grey fur instead of orange, and his eyes have black sclerae with red pupils and blood coming out of them. In addition, his right ear is torn. The inside of his mouth is black, with several triangular teeth.

Tails is very fast and agile thanks to his constant training with Sonic and he can fly using his two tails, spindash, and after being demonized, he can even disguise himself as normal, like Knuckles. In Nightmare Beginning Remake, he has an ability to cancel his flight called the "Insta-Drop".[1]He also has a super form. He doesn't use it frequently and didn't use it in the series. Tails, as being a member of the first trinity, and the first three victims of Exetior, he is demonstated as a very intelligent fox indeed, outsmarting Exetior all the time, and has usually been depicted as having an outrageous iq of 300.

One of Tails' portraits.

One of demonized Tails' portraits.

One of Tails' portraits 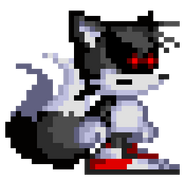