Traitor (by Exetior)
Master (by his servents)

"I don't demand too much. Only full and unquestioning submission to me!" ― in Sark's Reasoning

Sark is an antagonist in the series firstly introduced in Sally.exe Continued Nightmare. He is voiced by DarkBox.

Sark is a Demon who assisted Exetior in the war against the Highests alongside Pervision and Negagen. After they lost, Exetior and Negagen were imprisoned and Sark was put through mental torture by Stich-Lite until he was driven insane.[1]

Sark escaped one day and traveled to a dimension and killed its Sonic the Hedgehog, then shapeshifted into his appearance and went on a massacre. He managed to corrupt the world, and eventually killed the entire male population due to their rebellious and lustful behavior after demonization.[2]

In a secret cutscene of Part 2 of Sally.exe Continued Nightmare: Eye of Three, Eggman has found two Time Stones, and says that he couldn't find the others and that it's possible some were destroyed, but he then reveals that they can show a branch of the future requested.

Sark decides to see the future where Exetior subdues the second Trinity (Cream, Sally, and Amy) and other Freedom Fighters, where he sees himself standing over his Amy, about to torture her, with his Cream watching. After seeing that Exetior takes his Amy away, Sark is enraged and decides to betray Exetior.

Sark is insane and sadistic, and remorselessly punishes his servants if they fail to show up or are unsuccessful with his brutal orders. He is also very bossy, selfish, and possessive towards his servants, but can be smart at times.

Before the first war, he wanted absolute power and dominance over all Demons, and tried to take everything by force.[3]

Since he shares Exetior's appearance, he also appears similar to the original Sonic.exe, but retains Sonic's lighter fur and has bleeding eyes.

Sark has super strength and super speed, can shapeshift, fly,[4] summon red spikes, has the ability to demonize, and is immortal. He can also teleport to not very long distances, and get stronger and faster with rage. He can go into defensive mode, in which damage against him is either reduced or completely blocked. This increases his rage, however.[4]

Exetior and Sark were master and servant. Not much is known about how Exetior feels about Sark other than that he disapproves of his arrogance[5] and how harsh he is to his servants.[2] Sark was somewhat willing to work for Exetior, but was not very loyal, and ended up betraying him after a Time Stone showed Exetior taking Sark's servant away from him.

Sark and Cream are master and servant. Sark appreciates Cream's brutality and obedience. Cream has a crush on him, acts nicely towards him, and tries to get his attention.

Sark and Sally are master and servant. Sally is Sark's most liked servant and his "partner". Sally is obedient towards Sark, and secretly has a crush on him, but she hides it.[6]

Sark and Amy Rose are master and servant. Sark does not like Amy, tends to treat her badly such as with assaulting her physically and sexually, and he considers her to be useless for not being violent like Cream or Sally. Amy oddly remains loyal to Sark despite this, as she still sees a bit of her Sonic in him.[7] 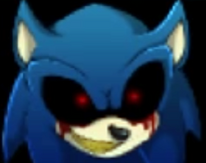 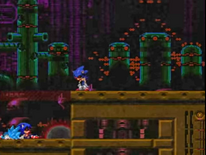