Pain Immunity
Regeneration
Super Strength
Psy is one of the distorted personalities of Jaiz Koys.

Not much is known about Psy's past. other than the fact Jaiz keeps him from taking over his body.

He is seen in Jaiz Koys' animation, Just Another Day, where Diana is exploring Resort Island, but encounters Chaos Hunter.

She signals Jaiz and Askail for help, but Chaos Hunter murders her before they get there. But they are saved by Exeana, who bites the dust soon after to Junter's hand. This causes Jaiz to fly into a rage, and during that moment, his control of Psy slips, and Psy uses that opportunity to escape and take control of Jaiz's body. Askail tells Psy to get lost, to which Psy beats him down inside the body's subconscious. Before Junter kills Jaiz, Psy emerges and engages in combat with Junter.

Psy is rage-driven, arrogant, and psychotic, and he seems to mock those inferior to him. However, he was easily tricked by Chaos Hunter into thinking that he killed him, although who he did kill was just an alternate version of Sonic.

Psy's appearance is sort of like a Super form of Jaiz, due to his fur taking on a more golden tone, and his markings becoming orange. His fur is ruffled. His eyes are bright yellow, and his pupils are a faint bluish colour.

Psy has immense power and is extremely durable. This was shown during his fight with Chaos Hunter, as he was able to tank his attacks, which are seen to immediately kill others, such as Amy, Cream, Sally, and Knuckles with ease. He seemed to actually hurt him during their duel.

Any damage Psy receives is quickly healed by his anger, as also seen in his fight with Junter.

One of Psy's portraits. 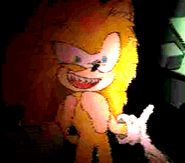