Edit
watch 01:36
We're Getting Mutants in the MCU - The Loop
Do you like this video?
Play Sound

As a Wave Demon, Negagen spent most of his time meditating around forests and surrounded by currents of water, deciding not to come into contact with any other demons.

One day, the demon was found by multiple mobians, and he quickly took their souls. Other Wave Demons were able to sense and locate Negagen as he tried to calm down the angered souls, leading to one of the demons, "Dia-Li-Lax", trying to attack him.

Unfortunately for Dia-Li-Lax, something quickly swept him away and knocked him unconscious. The entity before Negagen was Exetior, a Demon of Sharpness. Exetior then taught Negagen how to turn mobians into his brainwashed slaves. However, Dia-Li-Lax woke up and was finally ready to attack Negagen, but he used his minions to defeat the demon, all whilst contemplating why Exetior didn't attack him.

Negagen spent months trying to find Exetior after learning that he was actually a Highest in disguise and found him being confronted by Demons of Sharpness as well as Demons of Gap. Negagen sent an army of brainwashed souls into battle but was defeated and left unconscious.

He later woke up to find Exetior near him, back in the forest where they first met. Exetior thanked Negagen for his assistance, then said he should go back to his regular lifestyle and leave the fighting to him, but Negagen persisted, and Exetior allowed Negagen to accompany him. During the time he spent with Exetior, he formed a friendship with him and learned how to emote and socialize.[1]

|<The information shown below is part of a simulation.>
Negagen is only seen after an Easter Egg involving Amy battling an Orbinaut, where he is in front of the mind-controlled Amy.

Negagen doesn't appear until Part 2. He appears in multiple endings there, as he has a connection or part in playing the endings out. He can subdue Amy for some of the bad endings in which she is defeated, and even sends her to an alternate dimension with no escape.

When Amy gets sent into Negagen Temple, she is transported into Star Light Zone. She then is put into the body of a Motobug by Negagen, with him about to take her body. He tries to talk to Amy but fails and starts to chase her after taking control of her body. After his souls mess with Amy and transport her to different places, he prepares to brainwash her for good, but Cream is teleported to Negagen Temple and intervenes, spindashing him out of the way. Cream is then knocked unconscious by Negagen and he tries to brainwash Amy again, but she resists due to the blue emerald dropped by Cream. Then, Amy fights him.

Negagen is the primary antagonist in the Betray-Tion Ending. Amy fights Negagen, but in her struggle to defeat him, accidentally kills Cream while she is mind controlled. Amy mourns Cream's death, and then approaches the unconscious Negagen to tear him in half with a spindash, destroying his physical form. In the Sleep-Ever and Trappy-Hap Endings, he manages to subdue Amy and sends her to Last Dream, where she meets Limely.

In the canon ending, he is seen again lying unconscious next to an injured Exetior, who is sadly looking at him, with Sark looking over what seems to be their imminent demise before it fades out.

Negagen behaves in a calm manner due to having very poorly manifested emotions.[1] Due to this, he is seen as emotionless by others' standards.[2] He can imitate emotions if it feels necessary to him,[3] but he cannot experience blind rage, blind joy, or other things like that.[4] He endears Amy out of politeness[5] and as a way to try and make her feel comfortable, which does not work.

He is also a very loyal and trustworthy individual, showing great gratitude to Exetior for saving his life and dedicating himself to protecting and assisting him. However, he has a poor understanding of the laws of Mobius,[6] as shown in the end of Wave Perception.

When not in his true form, Negagen takes the appearance of Super Sonic, with a few changes. Instead of golden, he is light blue, and his irises are blue with white pupils. His eyes are often lidded, and glow faintly. He has three spines on the sides of his head instead of two.

Negagen's primary power is his ability to hypnotize people and take control of their souls, turning their colours negative. This is mainly achieved through a large energy beam he can shoot. However, this can be countered and prevented through a blue emerald.

His hypnotized victims' souls are sent to a world of happy illusions, while their bodies simply follow Negagen's orders without objection. They gradually lose their memories while stuck in the illusory worlds. These hypnotized servants behave similarly to in their normal state, but are devoid of bright emotions and have no desire to be self-willed.[1]

Negagen can also teleport himself and other individuals to wherever he wants, shoot energy beams, fly, and swap bodies with his victims as well as transport them into different bodies.

Negagen is immortal, and cannot die, although he can be taken out of his physical form.

Exetior and Negagen are master and apprentice, and each other's only known friend. They trust each other. Negagen is loyal and obedient towards Exetior, an example being when he refuses to let Amy go because Exetior told him to keep her there. He has great gratitude for Exetior having saved him in the past and feels an interest and affection for him.[2] Exetior is shown to care about Negagen various times, a few examples being from how he apologizes to him in the Ex-aitor Ending and when he expresses concern for Negagen as he hadn't returned in the Betray-Tion Ending. Being his mentor, Exetior also teaches him things sometimes.

Negagen and Limely are master and servant. Limely is obedient to Negagen, as she agrees to lure Amy into a trap at his request. However, it is unknown how Negagen feels about her.

Negagen and Sark didn't get along, and they are having a bad blood against each other, as one of his biggest rivals.

In an alternate ending, X attemped to kill Negagen and enslave his soul for good. Fun fact: Almost everyone hates X, as he thinks of himself that he is a god, and the fact that X wants to enslave literally EVERYONE doesn't help either.

He has the power of bright leaving him to beat anything out his way because he's the most overpowerd form of a different sonic and most important nicer. 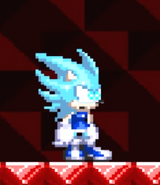 Negagen wearing a dress after wondering why some Mobians go fully dressed yet some do not.

From left to right: Tails, Knuckles, and Eggman. Note the inverted colors.