"Ready for Round One?" ― Exeller, Spirits of Hell: Round One Release Trailer[[source]]

Exeller is the titular main antagonist of Sonic.exe: The Spirits of Hell and Whisper of Soul. He is another associate of Exetior. He is not a demon, but a Highest. He is voiced by DarkBox.

Exeller was a third class Highest. He had good grades and a perfect attitude. He wanted to be an Earth Protector to be able to travel around Mobius without the king stopping him. He didn't think Mobians were as bad as his teachers said they were, as his friend, Alice, interacted with a few, and she said they were nice. Later, Exeller had a meeting with other third class Highests. There, he and the other Highests found out that the 'person with the red eyes' was not a person at all, but they didn't know what it was. The king later found out about this trip, and was not happy. He punished them. He didn't know what happened to Alice. Rexer got off with a warning, while Laura, Phil, Wayne, and Exeller himself had their magic prohibited for an entire week. Rexer promised them that he would show the last memories of his victims. Exeller found this to be creepy. Alice and Exeller would go see tomorrow, but Laura and Phil did not want to come. One day, Exeller and Alice traveled to Earth. They did not find a trace of the person with red eyes. Along the way, they met two Mobian hedgehogs- one was a child and the other one was older. Alice found the child to be annoying, but Exeller found him to be kind of cute. They came back to the Eternal World, and decided to relax. They gathered the other third class Highests into the Terra Woods and tried some things that they learned from Mobians. There, Laura kissed Exeller, breaking the rule that third classes cannot have romantic relationships. Later, Exeller found Laura infected in a cave. He only saw madness in her eyes, like the the eyes of the Highest in the victims' memories. She died, disappearing into ashes. Exeller was greatly affected by her death. Alice and Rexer had found some strange energy on Kuri Mountain, and Exeller contemplated joining them. Eventually, Exeller was cursed somehow, unlocking his abilities that were once dormant. One day, he kidnapped Wayne and cut his limbs off, gouged out his eyes, cut off his ears, and blocked his mind so no one could read his memories. Exeller felt satisfied by how he had defeated a second class, but he later felt to regret for doing it. He realized that he didn't need to kill to be satisfied, as people's mere suffering satisfied him entirely. He went to find Alice so she could answer some of his questions.[2] Later, he came to Mobius and he tried to terminate everyone. As well as he tried to kill everyone in the Vibing Pets Dimension but he failed because the pets and the Dancing Cow are invincible (Proof?).

Sonic.exe: Spirits of Hell: Round One[]

Exeller is the main antagonist and therefore plays a major role.

Sonic was walking in Green Hill, and talked to Tails before being possessed by Exeller. Exeller took over Sonic's body. Exeller found out that he didn't have enough souls, so he started tracking down Tails, Knuckles, and Eggman.

He tends to break the 4th wall as shown as he alongside Tails.exe appeared before the end credits and killed Knuckles and Eggman during their duo ending. He also reveals that solo and duo endings didn't count as good endings as he kills the survivors offscreen before telling the player to try their luck at getting the best ending.

In the Best Ending, Tails, Knuckles, and Eggman survive their encounters with Exeller because he lets them. They all arrive at Hidden Palace one by one and form a plan to go to Sky Sanctuary because they're confident Exeller can't sense them there. They teleport to Sky Sanctuary using the Master Emerald, but Exeller is already there. In a final attempt to kill the three, he sends Exebi to fight each of them. They eventually escape through a giant ring to Mountain Peak, with Sonic temporarily taking back control to tell Tails to run.

After the events of Spirits of Hell, Exeller goes after Amy, Cream, and Sally in order to expand the range of places he can sense, namely Mountain Peak, where the first three victims are hiding. If the player gets the Best Ending first, Exeller breaks the fourth wall once again and tells the player to get every ending in order to get the best ending.

Once the player gets all endings, they are then allowed to get the best ending. In the Best Ending, Exeller goes after all 3 of the second trinity of victims, they all survive their encounters with him. Right before Cream's encounter with him, He makes an announcement in Freedom City, informing them that he killed some of their people and that they now work for him. He gives the citizens of Freedom City 3 hours to prepare for his attack. Meanwhile, Sally is sent to the Highest Library by Rexer's ghost, where a clone of Exeller's normal form greets her and tells her to leave. Sally tells him she will speak with their queen, causing Exeller to reprimand her. He eventually sends her back to Volcano Valley, where Cream and Amy are.

Despite Exeller already making an announcement to the city about it, they go to warn everyone. On the way, Tails Doll and Sally look for a Chaos Emerald, where they find an illusion of Exeller's normal form. Exeller then lifts the illusion containing his normal form and collects the Chaos Emerald himself. He stuns all of them and steals Cream's Chaos Emerald. They also encounter the first trinity of victims, who join them. Sally also encounters Alice, who wishes her luck. The six victims form a plan of defense against Exeller. Knuckles, Sally, and Tails Doll would lead the front lines, Tails and Cream would be in the security room, controlling the lasers and generators, which disable any kind of energy. Amy and Robotnik would go for the Master Emerald and protect it.

The battle begins and Exeller immediately separates the three at the front lines. Sally ends up protecting the generators from Exeller's servants, with Knuckles activating them to defend the city from Exeller's illusions. Eggman and Tails end up meeting with Sally and Knuckles, Meanwhile, Amy fights Exeller's version of Metal Sonic, afterward meeting up with the rest and Cream. They all encounter Exeller's three servants, Execun, Exebark, and Exebi, who fuse into one entity called Ultamate Execun. He brings out everyone's inner demons except for Cream's. Cream ends up fighting U. Execun, freeing everyone in the process. However, one of Execun's smaller variations survives and tries to kill Cream, but Tails Doll saves her. Tails Doll himself has suffered a curse and disappears afterward, leaving only the gem that once hung from his head in Cream's possession.

They all go to the Master Emerald, but they're too late. Exeller is already using it. They join hands in a circle around the Master Emerald, transferring their minds into it. They eventually encounter Exeller for the final time in a decisive battle. Everyone but Sally returns outside the Master Emerald while she stays behind to ask Exeller a few questions. When she returns... she finds Sonic and everyone else unconscious. She looks over to see Exeller, now with his own body...

|<The information shown below is non-canon.>
Sonic is back to normal in the Good ending, but Exeller returns in his own body, and tries to terminate everything. Sonic has to fight him head-on.

|<The information shown below is non-canon.>
While he does not make a direct appearance, Exeller is mentioned by Pervision in the secret cutscene with Sark's Amy.

Exeller is sadistic and cruel. He punishes his servants if they fail to follow his orders, however nowhere near as badly as Sark does. Despite who he is, he claims that he's not like the other EXE's. He even restarted the timeline to give his victims another chance to survive.

In Whisper Of Soul, more is revealed about his personality. While still retaining his sadistic and maniacal personality, he is capable of showing remorse. One example of this would be in one of Cream's levels, right before Exebark is revealed. In the cutscene, he looks sad, and feels bad that Cream, a pure hearted and kind soul is forced to be a part of the prophecy.

He is shown to hate himself. In many timelines, he wishes he was not existing as it would take the pain away. He despises the monster that he is, not wanting to be a monster who kills for satisfaction.

As a Highest, he is a brown hedgehog with black rimmed glasses, green shoes and a green jacket. He also wears a red shirt underneath with blue jeans as well. He also wears gloves like Sonic. When in Sonic's body, Exeller looks identical to him except his eyes have black sclerae with red pupils and blood coming out of them, resembling the original Sonic.exe.

According to Exeller, the blood coming from his eyes are "tears of his rage", the tears he has been holding in for a long time.

Exeller can use any type of magic, but he prefers to use time, soul, and illusion magic.[1] He can create weaker clones of himself, as well as fly, teleport, and disguise himself as Sonic.

As Exeller is not a demon, he does not demonize his victims. Instead, he uses dark soul magic to turn them into his slaves and take the form of their dark side and fears.[3] 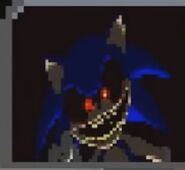 Exeller's old design in Round One. 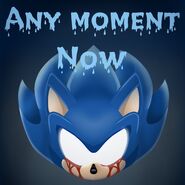 Exeller's New Design in Round Two

Community content is available under CC-BY-SA unless otherwise noted.