Sonic.exe Nightmare Version Wiki
Register
Don't have an account?
Sign In
Advertisement
in: Characters, Boys, Servant of Sark,
and 4 more

Unknown
Dr. Eggman is a version of Dr. Eggman from Sark's dimension. He is first introduced in Sally.exe Continued Nightmare: Eye of Three. He is a minor character.

When Sark came in Eggman's dimension, he not only killed and possessed the Sonic in that dimension, but managed to demonize most of the inhabitants living there, including Tails, Knuckles, Dr. Eggman himself, Sally, Cream, and Amy. Sark then began to use them as his servants.

He, Tails, and Knuckles were killed by Sark himself as a result of disobeying him. He then used the girls as his only other servants.[1]

Not much is known about Eggman's personality.

Eggman, when demonized, looks similar to when he was alive, but with grey skin, darker clothing, and red eyes. 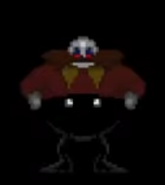