Sonic.exe Nightmare Version Wiki
Register
Don't have an account?
Sign In
Advertisement
in: Characters, Girls, Servant of Sark,
and 5 more

Same as Before
Spike Summoning
|<This article needs development. Help by adding to it.> Cream is a version of Cream from Sark's dimension. She first appears in Sally.exe Continued Nightmare. She is voiced by YuriHaru.

|<The information shown below is part of a simulation.>
Cream is only seen in an Easter Egg involving demonized Amy, where she is seen with Sark, as well as his Amy and his Sally.

Cream only appears in the beginning cutscene of Part 1, along with Sark, Sally, and Amy Rose. She plays no role.

Cream appears with Sark for the majority of the short. In this, we find out that Tails assaulted her sexually. This short also shows her having a crush on Sark.

|<The information shown below is non-canon.>
Cream appears in when Amy Rose was returning from her "meeting" with Exetior. She cusses her out, calls her a slut, and even threatens her life if she ever decided to return to "their parts".

Pervision then comes in and threatens her by saying that Exetior would not be pleased about what is happening. Cream insults him, but then is then knocked out by her co-worker, Sally. Cream later comes back to say that she could've apologized to Amy herself. Sally says that she already made them look bad in front of one of Exetior's main allies. She then starts to fight with Cream off-screen.

|<The information shown below is non-canon.>
Cream is a boss for Metal Exetior and Diana. She also appears with her co-worker, Sally, in another boss fight. In Sark's route, she is the one who accompanies him throughout the second part.

Cream looks like demonized Cream, but she has one white eye and the left one is closed, highly damaged, or isn’t there. It also has black blood coming out of it.

Cream was kind and fair, and also very nice. She was easily worried and scared.

Due to the way Sark demonizes his victims, Cream is reckless, doesn't care who she hurts, and rude. She is very nice to Sark, however, and has a crush on him. She is very jealous of Sally because Sark gives her more attention.

Cream can control spikes, since she died from impact with a huge spike wall,[2] but she can only use them as projectiles. She retains her ability to fly with her ears.

Sark and Cream are master and servant. Sark appreciates Cream's brutality and obedience. Cream has a crush on him, acts nicely towards him, and tries to get his attention.

Cream and Sally are co-workers. Cream is jealous of Sally because of the attention she gets from Sark, and has even attacked her once. Sally does not really like Cream, and has attacked her as well.

Cream and Amy are co-workers. Cream considers Amy to be useless, is rude to her and calls her names, and even suggests killing her to Sark, but it is unknown how Amy really feels about Cream.

Cream has contempt for Exetior,[2] but it is unknown how Exetior feels about Cream. 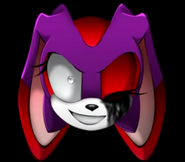 One of Cream's portraits. 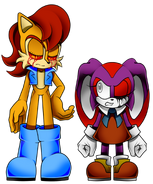 Cream's portrait with her eye open.

Cream with her eye open.