"Amy, why are you here? I told you to wait on the island, I'll kill you or ELSE" ― before he kills Amy or waits for else

Junter
Sonic (even though he's not the real sonic) Chaos hunter
sonic?…

“Just like me, You won’t understand what destroyed you.”

Chaos Hunter came to be through Sonic and Exetior's minds going into the same body (which was Sonic's) in the older version of Sonic.exe: Nightmare Beginning due to a failed cleansing from the Master Emerald in the Good ending, where they both were hit by the Emerald's energy.[1] The timeline was erased, but he escaped due to partially having the abilities of Exetior.[2] He went insane and started collecting souls and Chaos Emeralds to defeat Exetior, who he blames for the deaths of his friends and ruining his life.[3]

|<The information shown below is part of a simulation.>

Chaos Hunter only appears in a special cutscene where he approaches Knuckles and tries to get him to allow the absorption of the Master Emerald's power. Knuckles refuses, as a few hours ago Sonic's body was given back to him and he's still too weak.

Chaos Hunter plays no major role in the story.

He has the potential to kill any of the second Trinity (Amy, Sally, and Cream). Whenever he does so, they die instantly due to Chaos Hunter's super speed. When he kills any of the girls, it causes a new ending, due to the simulation being broken. He sends a message to Exetior informing him about the death of the girl(s), as well as a threat directed towards Exetior.

He appears in an Easter Egg of Part 1 involving the demonized second Trinity and Amy Rose collecting blue emeralds, and he is the last of the playable characters.

If all the emeralds are collected, Junter reaches a part resembling Hidden Palace where several versions of Knuckles are shown, and then he warps away to a higher part where he uppercuts Knuckles. He then lands on top of the Master Emerald. Knuckles urges him to not do it, but Junter doesn't listen and destroys Knuckles using the Master Emerald's power, turning him into a blue emerald.

Junter then says "Another stone. Another soul. I need it." before walking offscreen. He says that there's not much time left for the demon Exetior, showing him killing another version of Knuckles. He says that he only needs a couple dozen dimensions and a couple dozen Knuckles' souls and then he'll be ready. It shows Junter with his back turned and with Exetior's colors. He says that just like him, Exetior won't understand what destroyed him. Then he turns, showing him to have one eye resembling Exetior's.

If not all emeralds are collected, it will show a scene with two Junters, in which the one on the right summons an Exetior head and kills the other one with it, causing him to disintegrate. He then looks at the screen and asks, "What have you done, Exetior?"

If during the Easter Egg, one of the playable characters touch an Exetior head, it shows Junter's eyes glowing in the dark, it occasionally flashing to show his entire head, with reversed and distorted crying sounds.

He plays a role in the End of Hope Ending, where he convinces Sonic that Exetior is a traitor, causing Sonic to transform into his fleetway Super Form out of rage and fight Exetior.

He is present in a cutscene of the Best Ending where Sally finds him in Resort Island. Thinking that it's Sonic, she approaches him with growing static before it cuts off. It's shown that she was decapitated by him. Junter says that they (him and Exetior) will meet soon, and then he will leave. He then warps away (dont goto happy land (: ).

He is also seen talking to Sonic for a second when Sally is sent to Sonic's mind.

Sally.exe: The Whisper of Soul[]

In Knuckles' Solo Route, Chaos Hunter appears out of nowhere, and spindashes Knuckles, injuring him. He then blasts Knuckles with a laser, and steals an emerald. Exeller, surprised, decides to pay Exetior a visit, mistaking him for one of his slaves.

Chaos Hunter is insane, indicated by his permanently-shrunken eyes and the fact that he is almost always blaming Exetior for all the deaths he causes, but this is due to his insanity (and also possibly him being self-aware about Exetior being a part of him). He kills nearly everyone he comes across. His only goal is to get revenge, and if he succeeds with that goal, he will lose his motivation to live and die [4] and his flesh will rot off and his skeleton will disintegrate.(pretty much suicide)

Chaos Hunter appears identical to Sonic, but he has no pupils and his irises are always shrunken with green color, Sometimes, he has the same dark fur as Exetior and/or one of his eyes look like Exetior's.

Chaos Hunter has the same super speed that Sonic has, and can travel through different dimensions. He also has the ability to hypnotize any version of Sonic and make them believe what he says. The Sonic will not remember the meeting afterwards, and consider it to be his own thoughts.[5] He partially has Exetior's abilities.[2]

Chaos Hunter is Exetior's enemy, and his goal is to defeat Exetior by collecting souls and Chaos Emeralds. However, Exetior is not aware of Chaos Hunter's existence(unless you refer to master ui kostas. However chaos hunter can only see Old Exetior

One of Chaos Hunter's portraits. 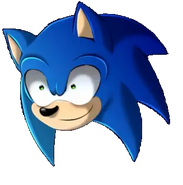 “Just like me, you won't understand what destroyed you.”