|<This is a featured article!>

Spinball
High Jumping Power
Agility
Amy Rose is one of the protagonists of Sally.exe Continued Nightmare and Sally.exe Continued Nightmare: Eye of Three, along with Cream and Sally Nettle. She is voiced by ChicaSeptic, and was voiced by RainbowPanda in the past. And along with Sally and Cream, she is a member of the second trinity and Exetior's victims.

From early childhood, she knew that there was danger waiting her in the every corner, due to the attacks of robots which were created by Eggman.

One time, when escaping from the robots, she hid in an unusual forest called the "Iron Forest" filled with​ circular saws and crossbows. The forest seemed alive to her. Upon returning home, she saw that all that she loved had been totally destroyed by the robots and only the body of her father remained.

After this, Amy decided to return back to the Iron Forest, which became her home. Thanks to it, she became faster, stronger, and more agile, being used to the dangers of the forest. She was able to survive and adapt to the dangerous forest, and she lived there for 15 years. Amy began to love and treasure the forest, and it seemed to her that the woods had taken a strong liking towards her too.

One day, while walking through the forest, she came across a hedgehog who almost was caught in a trap of saws, which are often found in the forest. The mysterious hedgehog was none other than Sonic the Hedgehog, the celebrated hero of the Freedom Fighters. After meeting him, she was able to join the Freedom Fighters themselves, and began to help protect the city from attacks by Dr. Robotnik.

Later, she met Sally and Cream.​ She became very good friends with the two, and began to see Cream as her little sister and​ maybe even a daughter of sorts.[1]

Amy is seen as an Easter Egg along with Sally and Cream at some points of the game, and at the end of Knuckles' Average Ending.

|<The information shown below is part of a simulation.>
To be added...

|<The information shown below is non-canon.>
In the episode, Amy couldn't tolerate insults towards Rosy from Sark's Cream, and she decides to give Rosy training lessons to defend herself.

Demonized Amy is seen near the end of the episode walking in the Blood Temple.

|<The information shown below is non-canon.>
Demonized Amy is seen near the end of the episode telling demonized Cream to go. Cream then says she will, but stays for a bit to talk to Tails before actually leaving.

|<The information shown below is non-canon.>
To be added...

Amy's personality is very different from canon. She is not obsessed with Sonic, and is much more independent and skilled. She is greatly protective of her friends and is quick to try and save them from harm. She has also shown herself to be selfless, helping people that she does not know several times. She is very polite, cute, adorable and always actually had feelings for Sonic, even when he was trapped ''inside'' of Exetior.

Amy is pink with light skin, green eyes, and a red headband like canon, but she has three upturned quills, and wears a white shirt with a red heart on it along with a gridded green skirt and purple sneakers. She usually has shorter spike curved downwards and wears red and white boots and a pink skirt. In the Sonic EXE series, this appearance of Amy is unique and only been used / seen in this specific series.

When demonized, her pink fur becomes more reddish and her eyes have black sclerae with red pupils, just like Exetior's. Her behaviour is more evil as well, although, she mostly seems to be the same Amy. Also, when Amy was turning to EXE, she was like the original Amy, blinded in one eye, while the other was black with a red pupil like the eyes of Exetior.

Amy is greatly agile and fast thanks to her training with Sonic, and she can ride on top of Badniks. She has a crossbow, and is a great cook. She also used to have a sledgehammer when she was young. She can also access her super form, which is very rarely used for Amy. Her super form is strong but we don't know yet about her hyper form. Her super is still just yellow and very strong, though not as strong as many others. Still, strong enough to beat Eggman and robots.

One of Amy's portraits.

One of demonized Amy's portraits. 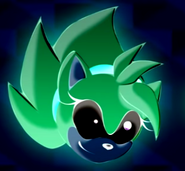 Amy with Exetior, Sally Nettle, and Cream in one of her "Give Up" screens.